Given China already has entirely empty cities, as well as the world’s largest mall (and it’s empty), one can only wonder what the occupation rate of its next project will be.

Nonetheless, Gizmodo reports China Will Build the Tallest Building In the World in Just 90 Days.

According to its engineers, this will be the tallest skyscraper in the world by the end of March of 2013. Its name is Sky City, and its 2,749 feet (838 meters) distributed in 220 floors will grow in just 90 days in Changsha city, by the Xiangjiang river. Ninety days!

It’s not a joke. According to the construction company, the skyscraper will be built in just 90 days at the unbelievable rate of five floors per day.

They will be able to achieve this impossibly fast construction rate by using a prefabricated modular technology developed by Broad Sustainable Building, a company that has built 20 tall structures in China so far, including the a 30-story hotel [constructed in 360 hours – see link for time-lapse video].

Unlike the Burj Khalifa, the tower will be mostly habitable. Its final height will be 2,749 feet high (838 meters). Compared that to the Burj’s 2,719 feet (829 meters), which include the spire at the top resulting in a total of 163 floors.

Sky City will use an astonishing 220,000 tons of steel. The structure will be able to house 31,400 people of both “high and low income communities”. The company says that the residential area will use 83-percent of the building, while the rest will be offices, schools, hospitals, shops and restaurants. People will move up and down using 104 high speed elevators.

They also claim it will be able to sustain earthquakes of a 9.0 magnitude and be resistant to fire for “up to three hours,” as well as be extremely energy efficient thanks to thermal insulation, four-panned windows and different air conditioning techniques that were already used in their previous constructions. 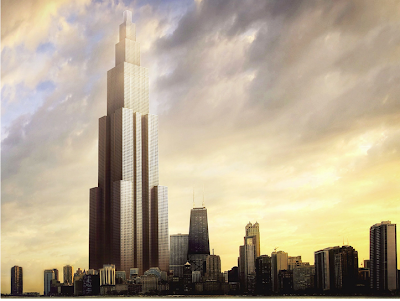 Readers from Chicago will quickly recognize that skyline.

Chicago’s Hancock Building (with two spires at the top) is 100 stories tall (1,127 feet) tall. Thus the “Sky City” rendition is not remotely to scale.

The Miasma School of Economics