The worst quarterly change in real GDP during the Great Recession was -8.4% annualized in Q4 2008.

The worst YoY change in real change during the Great recession was -3.9% in Q2 2009.
Annualized real GDP was at -32.9% in Q2 2020, and the YoY change in real GDP was -9.5%.
Note that the tax changes at the end of 2017 had minimal impact on GDP (maybe boosted slightly), and also, as shown earlier, there was no investment boom following the tax changes. 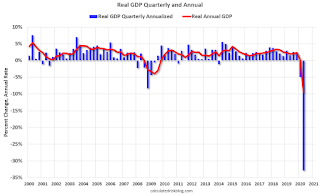 There will be some bounce back for GDP in Q3.   The worst month for economic activity was in April 2020, and the economy bounced back in May and June.

Even if there is no further increase in economic activity in the July, August and September – compared to June – GDP will increase because April was so bad.
previous post

The Resolutes Are Scaring The Crap Out Of The Gold Shorts!

Comparing US, EU and China GDP

What You Missed This Week in EVs and Clean Energy

Housing: Inventory will Tell the Tale; Altos Research Reports Inventory Above Peak in 2021