The November employment report was better than expected, but mostly because expectations were so low due to Hurricane Sandy.  A couple of employments highlights: seasonal retail hiring was surprisingly strong (could indicate a decent holiday retail season), and it appears the state and local government layoffs are mostly over.

On Monday we saw dueling headlines: “ISM Manufacturing index lowest since July 2009” and “Auto Sales highest since 2007”.    Both reports were probably impacted by Hurricane Sandy, with a negative impact on manufacturing, and auto sales were bouncing back from a weak October.  The reality is the economy is still growing – sluggishly – although manufacturing remains a weak sector.

Other reports were mostly positive: the ISM service index was above expectations, construction spending continues to increase, and initial weekly unemployment claims are declining following the Hurricane Sandy spike.  A negative on Friday was consumer sentiment, and that may be impacted by the austerity debate (aka “Fiscal cliff) and the apparent lack of progress.

While we still believe an agreement is slightly more likely before year end, there is a clear possibility that it could slip to late December or even early 2013. That said, we remain confident that Congress will resolve the issue by mid-January.

There are two potential paths to an agreement. The current focus is a comprehensive package of tax revenue increases, spending reductions, and an increase in the debt limit. In a broad package, the risk would probably be toward slightly more expansive fiscal policy than we assume in our forecast, since some changes (e.g., the scheduled payroll tax increase) might be phased in more slowly as a result of a political compromise.

Fallback plans have also gained recent attention. One alternative would be for the House of Representatives to simply pass an extension of the middle-income tax cuts. This would avoid the largest single source of fiscal restraint scheduled for 2013, but it would lead to more fiscal restraint than we expect if other aspects of the fiscal cliff are not addressed. Moreover, failure to increase the debt limit would create a second source of uncertainty in early 2013.

I expect an agreement to be reached, but probably not until January so politicians can claim they didn’t vote for a tax increase (the tax cuts expire at the end of the year). I also expect the agreement to include raising the debt ceiling.

Here is a summary of last week in graphs: 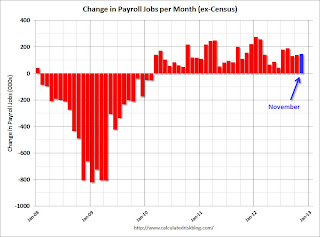 With all the uncertainty about the impact of Hurricane Sandy, this was a decent report, especially with the decline in the unemployment rate. However, negatives include the downward revisions to prior months, and the decline in the participation rate.

The headline number was above expectations of 80,000, but both September and October payroll growth was revised down. 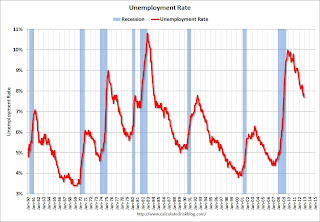 The unemployment rate is from the household report.

The unemployment rate declined because of lower participation (a decline in the civilian labor force). 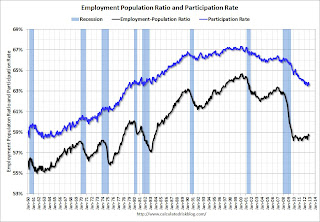 The Labor Force Participation Rate decreased to 63.6% in November (blue line. This is the percentage of the working age population in the labor force.

The participation rate is well below the 66% to 67% rate that was normal over the last 20 years, although most of the recent decline is due to demographics. 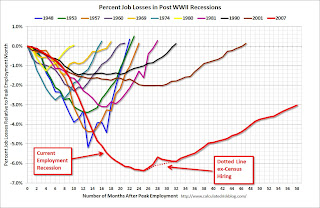 The fourth graph shows the job losses from the start of the employment recession, in percentage terms, compared to previous post WWII recessions. The dotted line is ex-Census hiring.

This shows the depth of the recent employment recession – worse than any other post-war recession – and the relatively slow recovery due to the lingering effects of the housing bust and financial crisis.

According to the BLS employment report, retailers hired seasonal workers at a record pace in November. 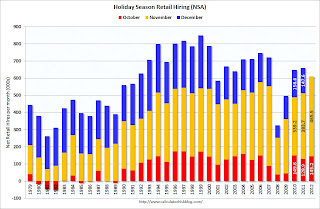 Typically retail companies start hiring for the holiday season in October, and really increase hiring in November. Here is a graph that shows the historical net retail jobs added for October, November and December by year.

This really shows the collapse in retail hiring in 2008. Since then seasonal hiring has increased back to normal levels.

Retailers hired 465.5 thousand workers (NSA) net in November. The combined level for October and November is the highest ever. Note: this is NSA (Not Seasonally Adjusted).

This suggests retailers are fairly optimistic about the holiday season. There is a decent correlation between retail hiring and retail sales, see: Retail: Seasonal Hiring vs. Retail Sales 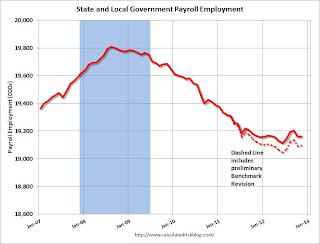 Note: The dashed line shows an estimate including the benchmark revision. 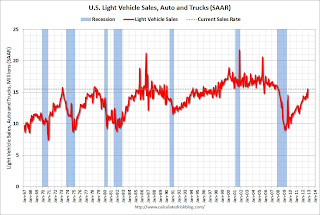 Based on an estimate from Autodata Corp, light vehicle sales were at a 15.54 million SAAR in November. That is up 15% from November 2011, and up 9% from the sales rate last month. This is the highest level of sales since December 2007.

This was above the consensus forecast of 15.0 million SAAR (seasonally adjusted annual rate), however some of the increase was a bounce back from Hurricane Sandy that negatively impacted sales at the end of October.

Most (or all) of the month-to-month decline in October was related to Hurricane Sandy, and some of the sharp increase this month was a bounce back.

• ISM Manufacturing index declines in November to 49.5, Lowest since July 2009 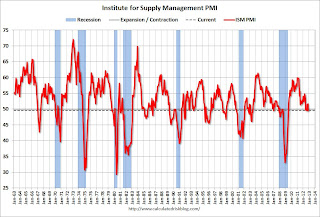 This was well below expectations of 51.7% and suggests manufacturing contracted in November. 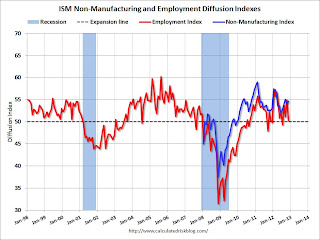 The November ISM Non-manufacturing index was at 54.7%, up from 54.2% in October. The employment index decreased in November to 50.3%, down from 54.9% in October. Note: Above 50 indicates expansion, below 50 contraction.

This was above the consensus forecast of 53.6% and indicates faster expansion in November than in October. The internals were mixed with the employment index down, but new orders up. 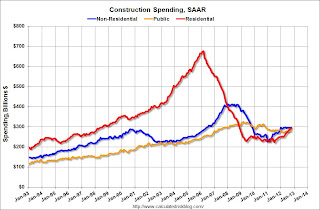 Public construction spending is now 14% below the peak in March 2009 and just above the post-bubble low.

Looking forward, private residential construction spending will be the largest category again very soon – but spending is still very low (at 1998 levels not adjusted for inflation).

All Housing Investment and Construction Graphs 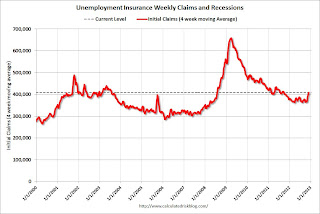 The dashed line on the graph is the current 4-week average. The four-week average of weekly unemployment claims increased to 408,000.

This sharp increase in the 4 week average is due to Hurricane Sandy as claims increased significantly in NY, NJ and other impacted areas over the 4-week period (some of those areas saw another decline this week). Note the spike in 2005 was related to hurricane Katrina – we are seeing a similar impact, although on a smaller scale.

Weekly claims were lower than the consensus forecast. 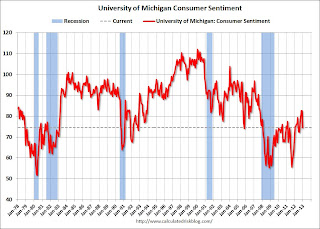 The preliminary Reuters / University of Michigan consumer sentiment index for December declined to 74.5 from the November reading of 82.7.

This was way below the consensus forecast of 83.0. There are a number of factors that can impact sentiment including unemployment, gasoline prices and other concerns.

Back in August 2011, sentiment declined sharply due to the threat of default and the debt ceiling debate.  Hopefully we will not see a repeat of that debacle.