The key event this week is the two day FOMC meeting on Tuesday and Wednesday.   With the coming conclusion of Operation Twist, there is a very strong possibility that the Fed will announce additional accommodation.

The key reports for this week will be the October trade balance report on Tuesday, the November retail sales report on Thursday, Industrial Production on Friday, and November CPI also on Friday.

7:30 AM ET: NFIB Small Business Optimism Index for November. The consensus is for a decrease to 92.5 from 93.1 in October. 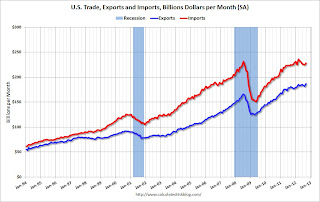 8:30 AM: Trade Balance report for October from the Census Bureau.

This graph is through September. Both exports and imports increased in September, and exports were at a new high.

The consensus is for the U.S. trade deficit to increase to $42.8 billion in October, up from from $41.5 billion in September. Export activity to Europe will be closely watched due to economic weakness. Note: the strike at the ports of Long Beach and Los Angeles started in late November, and this report is for October. 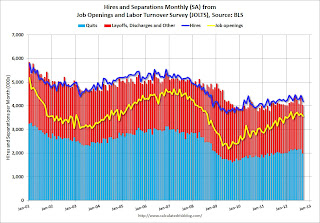 10:00 AM: Job Openings and Labor Turnover Survey for October from the BLS.

Jobs openings decreased in September to 3.561 million, down slightly from 3.661 million in August. The number of job openings (yellow) has generally been trending up, and openings are only up about 2% year-over-year compared to September 2011.

10:00 AM: Monthly Wholesale Trade: Sales and Inventories for October. The consensus is for a 0.4% increase in inventories.

7:00 AM: The Mortgage Bankers Association (MBA) will release the mortgage purchase applications index.

8:30 AM: Import and Export Prices for November. The consensus is a 0.4% decrease in import prices.

12:30 PM: FOMC Meeting Announcement. With Operation Twist ending in a few weeks, the FOMC will probably announce additional policy accommodation that will start in January.

2:00 PM: FOMC Forecasts The will include the Federal Open Market Committee (FOMC) participants’ projections of the appropriate target federal funds rate along with the quarterly economic projections.

8:30 AM: The initial weekly unemployment claims report will be released. The consensus is for claims to be unchanged at 370 thousand.

8:30 AM: Producer Price Index for November. The consensus is for a 0.5% decrease in producer prices (0.2% increase in core). 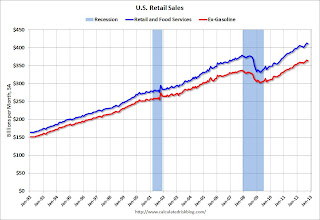 8:30 AM ET: Retail sales for November will be released. October retail sales (especially auto sales) were impacted by Hurricane Sandy, and auto sales bounced back in November.

This graph shows retail sales since 1992. This is monthly retail sales and food service, seasonally adjusted (total and ex-gasoline). Retail sales are up 24.2% from the bottom, and now 8.6% above the pre-recession peak (not inflation adjusted)

The consensus is for retail sales to increase 0.6% in November, and to be unchanged ex-autos.

8:30 AM: Consumer Price Index for November. The consensus is for CPI to decrease 0.2% in November and for core CPI to increase 0.2%. 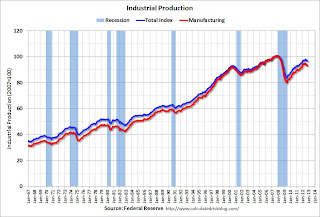 9:15 AM: The Fed will release Industrial Production and Capacity Utilization for November.

This shows industrial production since 1967.

The consensus is for a 0.3% increase in Industrial Production in November, and for Capacity Utilization to increase to 78.0%.