Notes: This CoreLogic House Price Index report is for December. The recent Case-Shiller index release was for November. Case-Shiller is currently the most followed house price index, however CoreLogic is used by the Federal Reserve and is followed by many analysts. The CoreLogic HPI is a three month weighted average and is not seasonally adjusted (NSA).

From CoreLogic: CoreLogic Home Price Index Rises for the 10th Consecutive Month in December; Biggest Year-Over-Year Increase Since May 2006

Home prices nationwide, including distressed sales, increased on a year-over-year basis by 8.3 percent in December 2012 compared to December 2011. This change represents the biggest increase since May 2006 and the 10th consecutive monthly increase in home prices nationally. On a month-over-month basis, including distressed sales, home prices increased by 0.4 percent in December 2012 compared to November 2012. The HPI analysis shows that all but four states are experiencing year-over-year price gains.

The CoreLogic Pending HPI indicates that January 2013 home prices, including distressed sales, are expected to rise by 7.9 percent on a year-over-year basis from January 2012 and fall by 1 percent on a month-over-month basis from December 2012, reflecting a seasonal winter slowdown.
…
“December marked 10 consecutive months of year-over-year home price improvements, and the strongest growth since the height of the last housing boom more than six years ago,” said Mark Fleming, chief economist for CoreLogic. “We expect price growth to continue in January as our Pending HPI shows strong year-over-year appreciation.” 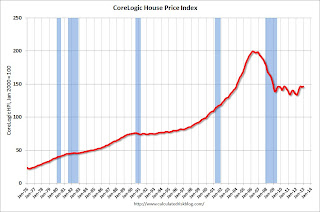 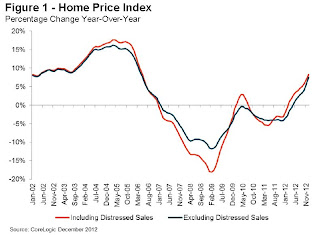 The second graph is from CoreLogic. The year-over-year comparison has been positive for ten consecutive months suggesting house prices bottomed early in 2012 on a national basis (the bump in 2010 was related to the tax credit).

This is the largest year-over-year increase since 2006.

Since this index is not seasonally adjusted, it was expected to decline on a month-to-month basis in December – instead the index increased, and, considering seasonal factors, this month-to-month increase was very strong.