The outlook for the housing sector just got a boost from a sharp jump in new home sales, up 10.8 percent to a 544,000 annualized rate that is 44,000 over the Econoday consensus and 24,000 over the high estimate. The gain, however, may have been boosted by discounting as the median price slipped 2.7 percent to $288,900 for a year-on-year rate of minus 4.3 percent.

With builders slow to bring new homes to market, low supply remains a central factor holding back sales. Supply did rise 6,000 in the month to 237,000 but supply relative to sales fell back to 5.2 months from 5.6 months. A reading of 6.0 months is considered to be the balance point between supply and demand.

Regional data show a 32 percent sales surge in the Midwest where the year-on-year rate of 39 percent is the strongest. Sales in the West and Northeast both rose 21 percent in the month with the year-on-year rate in the West, which is a key region for new housing, up 22 percent while the Northeast, which is a very small region in this report, down 6.5 percent on the year. The South, which is the largest region, shows a fractional gain in the month and no change on the year.

For full year 2015, new home sales rose 14.7 percent to 501,000 from 437,000 in 2014. Sales of new homes have been noticeably higher than prices, suggesting that prices have room to accelerate. This report follows special strength in existing home sales with both perhaps benefiting from December’s warm weather but with both pointing nevertheless to new momentum for 2016.

Why did sales surge 39% in the Midwest? Because this was one of the warmest December on record even discounting global warming silliness.

Bloomberg calls this “new momentum” for 2016. Indeed it is, but that momentum is negative.

This statement by Bloomberg caught my eye: “Sales of new homes have been noticeably higher than prices, suggesting that prices have room to accelerate.“

Prices Have Room to Fall

I suggest home prices have room to fall. Curiously so does Bloomberg, albeit in different ways, and in a different article. 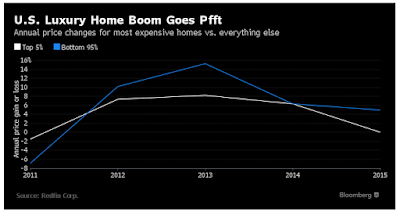 Prices for the top 5 percent of U.S. real estate transactions remained flat in 2015 while all other houses gained 4.9 percent, according to data from Redfin Corp., a real estate brokerage and data provider.

In nearby Sunny Isles, Florida, faraway currency fluctuations are endangering the sale of a $3.7 million condominium.

In Houston, the plunge in oil prices to a 12-year low is killing the luxury boom. Sales for homes priced at $500,000 or more dropped 17 percent in December from a year earlier, according to the Houston Association of Realtors.

Manhattan resale prices for the top 20 percent of the market peaked in February and have fallen every month since, according to an analysis through October by listings website StreetEasy.

Even in San Francisco, where the market for luxury properties remains strong, the inventory of listings for $2 million or more jumped in October to a record level, said Patrick Carlisle, chief market analyst for Paragon Real Estate.

“More sellers are jumping in and more buyers are holding off because they’re worried about where the volatility is going,” Carlisle said.

Buyers are now on the hunt for deals, said Nela Richardson, chief economist at Redfin.

“There’s a limit even to what a wealthy person will spend,” she said.

Bloomberg did not make the necessary connection, but they did provide the chart. Let’s tie up some loose ends.

In bonds, rot starts with junk and spreads to the core. With homes, price rot starts at the high end.

With Chinese West-coast buyers now not feeling so wealthy after a 47% plunge in the stock market, and with “Temporary” Capital Controls likely on the way, that segment of the high-end market is toast.

The strong dollar is having the same effect in Florida. And in New York, well … “There’s a limit even to what a wealthy person will spend.”

Let’s return to the Econoday “room to accelerate” misanalysis.

If homebuilders could sell more expensive homes, they surely would. And at the very high end, it appears we have hit the peak. That group is “all in”.

It was one hell of a bubble-reblowing effort by the Fed, but another slide lower awaits. New homes prices rate to get cheaper and cheaper with more and more features added.

In turn that will lower the price of similar existing homes. This stuff does cascade. We have seen it before.

There’s plenty of talk about lack of supply. Actually, there’s an ample supply of homes. There’s just no supply at prices people are willing and able to pay.

Expect lower, not higher prices. And if you need to get out, beat the rush, if you still can.

The $FCX Is Squeezing