The BEA “Advance GDP” estimate for 4th quarter came in today at +0.7% vs. an Econoday Consensus Estimate of 0.9%.

Consumer spending is the central driver of the economy but is slowing, at least it was during the fourth quarter when GDP rose only at a 0.7 percent annualized rate. Final demand rose 1.2 percent, which is the weakest since first quarter last year but is still 5 tenths above GDP.

Spending on services, adding 0.9 percentage points, was a leading contributor to the quarter as was spending on goods, at plus 0.5. Residential investment, another measure of consumer health, rose very solidly once again, contributing 0.3 percentage points. Government purchases added modestly to growth.

Price data are not accelerating, at plus 0.8 percent for the GDP price index which is the lowest reading since plus 0.1 in the first quarter last year. The core price reading is only slightly higher, at plus 1.1 percent which is also the weakest reading in a year.

There are definitely points of concern in this report, especially the weakness in exports and business investment, but it’s the resilience in the consumer, despite a soft holiday season, that headlines this report and should help confirm faith in the domestic strength of the economy.

The Atlanta Fed “Final” GDPNow Estimate for the 4th quarter was posted on January 28. 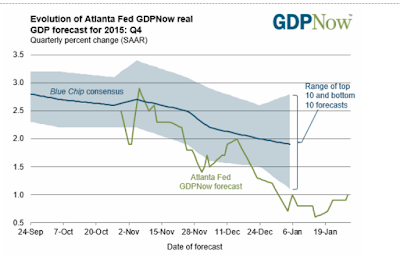 That was the last estimate the GDPNow model will make for the 4th quarter. It’s first estimate or 1st quarter GDP growth will be released Monday, February 1.

Q&A #1: Why Did GDPNow Rise After Durable Goods Report?

“Hi Mish, As you probably noticed the model forecast for the contribution of equipment investment to fourth quarter GDP growth declined 0.07 percentage point after the durable goods manufacturing report.  But this was more than offset by a 0.20 percentage point increase in the contribution of inventory investment to fourth quarter growth after that same report.  The model didn’t use the December data on shipments of nondefense aircraft & parts which had an unusually large decline last month (from $16.0 billion to $10.8 billion).  That data isn’t ever folded in until the exports and imports data for civilian aircraft and parts is released. The net shipments measure fed into the model is aircraft & parts shipments plus imports minus exports. Since the December international trade data won’t be released until after the GDP release, the December aircraft data won’t ultimately be used for the fourth quarter GDPNow forecast.”

Answer: It appears so at first glance. The Econoday consensus estimate of 0.9% is remarkably close to the 1.0% GDPNow estimate on the 28th. Then again, the Econoday range was a remarkable 0.0% to 2.3%. Why any economist would have predicted 2.3% is a mystery. That alleged economist ought to be following GDPNow more closely.

Answer: Any time between February 26, 2016 and the next 10 years. The next release of 4th quarter GDP will come on February 26. It will revise this “advance” estimate of 0.7%. The BEA won’t label it as a revision though. Instead they will label the next revision the “preliminary” estimate for 4th quarter even though 1st quarter 2016 will be nearly two-thirds over on that date. The alleged “final” estimate for 4th quarter 2015 will come on March 25. Official revisions can happen years, even a decade or more later. Here’s the BEA Schedule.

Q&A #4 – What About Construction Revisions?

The above question pertains to a massive GDP revision announced on January 4.

For details please see Diving Into the Revisions: Construction Spending Revised Lower 7 Consecutive Months! 2015 GDP Will Decline vs. Estimates: By How Much?

The BEA blamed a “Processing Error“. That processing error will affect GDP results all the way back to 2005 which explains my previous statement “official revisions can happen years, even a decade or more later.”

When will we know? I called the BEA on this in early January. The date I recall was July 26.

These guys are fast aren’t they?

The main effect of the processing error is that construction spending for 2014 was way lower than reported. This will cause GDP in 2014 to rise.

In a research note, IHS Global Insight US economist Patrick Newport wrote “The upward revision to spending in 2014 is enough to raise growth that year from 2.4% to 2.6%-2.7%. The revisions are likely to boost growth for 2015 as well.”

Newport’s assessment about 2015 is undoubtedly wrong.

On January 5, I posted this table of construction revisions that I calculated from the BEA’s revision announcement.

A quick glance at that table should convince you that GDP will go up in 2014 and down in 2015.

At the start of recessions, GDP is frequently revised way lower for prior quarters, long after the fact, and without a doubt the US economy is flirting with, if not in recession right now.

Thus, construction spending is not the only subtraction I foresee.

For my take on recessions vs. the Fed model (not the Atlanta Fed GDFP model), please see Fed “Workhorse” Model Says Odds of Recession in Next Year Only 3.56%; What are the Real Odds?

Whether or not you accept my statement the US economy is very close to if not in recession right now, the Fed 12-month look ahead model of 3.56% is preposterous.

Bloomberg repeated the widely held belief “Consumer spending is the central driver of the economy.”

I dispute that. So do others. See my article Debunking the Myth “Consumer Spending is 67% of GDP”
I cannot claim credit for the idea. To fully understand why the consumer is not the driver of the economy, please see …

Gross Domestic Output: Linking Austrian and Keynesian Economics: A Variation on a Theme by Mark Skousen.

Skousen destroys the fallacy that consumer spending drives the economy.