Economists expecting a huge surge in construction spending thanks to unusually warm December weather were no doubt shocked by today’s anemic report.

Held down by weakness in the nonresidential component, construction spending didn’t get a lift at all from the mild weather late last year, rising only 0.1 percent in December following a downwardly revised 0.6 percent decline in November and a 0.1 percent contraction in October. Year-on-year, spending was up 8.2 percent, a respectable rate but still the slowest since March last year.

Rates of growth in the public readings are led by highway & streets, at a 9.4 percent surge for December and a year-on-year rate of plus 12.0 percent. Educational growth ended 2015 at 9.4 percent with state & local at plus 4.4 percent. The Federal subcomponent brings up the rear at minus 1.4.

Lack of business confidence and cutbacks for business spending are evident in this report but not troubles on the consumer side, where residential spending remains very solid and a reminder that the housing sector is poised to be a leading driver for the 2016 economy. Still, the weak December and revised November headlines are likely to pull down, at least slightly, estimates for revised fourth-quarter GDP which came in at plus 0.7 percent in last week’s advance report. 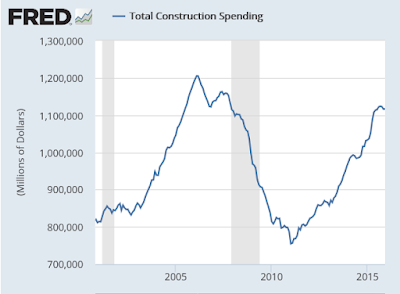 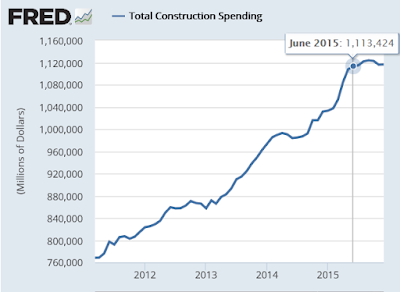 Where to From Here?

It remains to be seen if “the housing sector is poised to be a leading driver for the 2016 economy“.

I strongly suspect “not”.