The BEA released the Personal Income and Outlays report for January: 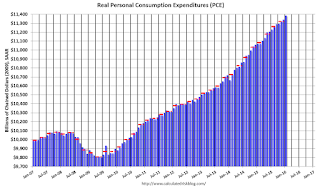 There are two ways to look at Powell’s speech