The University of Michigan consumer sentiment index for February was at 91.7, up from the preliminary reading of 90.7, and down from 92.0 in January:

“Consumer confidence nearly recovered the entire small loss it recorded at mid month, with the Sentiment Index finishing February just 0.3 Index-points below January. Although consumers are not as optimistic as at the start of last year, the Sentiment Index is just 6.5% below the cyclical peak of 98.1 set in January 2015. Such a small decline is hardly consistent with the onset of a downturn in consumer spending. …
…
Most of the decline from last year’s peak has been in how consumers view year-ahead prospects for the economy, while the outlook for their personal financial situation has improved to its best level in ten years.”
emphasis added

This was above the consensus forecast of 91.0. 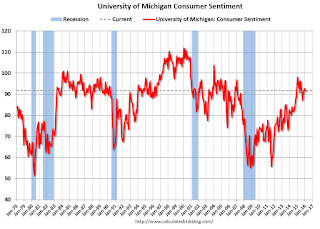 Now We Can Finally Start Buying The Gold Miners