Freddie Mac reported that the Single-Family serious delinquency rate increased in January to 1.33% from 1.32% in December. Freddie’s rate is down from 1.86% in January 2015.

These are mortgage loans that are “three monthly payments or more past due or in foreclosure”.

Note: Fannie Mae is expected to report early next week. 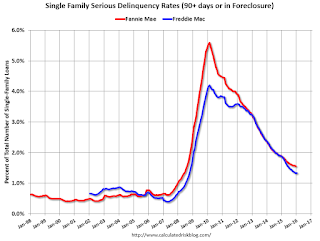 Although the rate is generally declining, the “normal” serious delinquency rate is under 1%.

I expect an above normal level of Fannie and Freddie distressed sales through 2016 (mostly in judicial foreclosure states).

Now We Can Finally Start Buying The Gold Miners