From Zillow: March Case-Shiller Forecast: Expect the Slowdown to Continue

All three headline S&P/Case-Shiller Home Price Indices grew at a slightly slower pace in February compared to January, and the slowdown should extend into March, according to Zillow’s March Case-Shiller forecast.

The March Case-Shiller National Index is expected to gain another 0.3 percent in March from February, down from 0.4 percent growth in February from January. We expect the 10-City Index to grow 4.3 percent year-over-year in March, and the 20-City Index to grow 5 percent over the same period, down from annual growth of 4.6 percent and 5.4 percent in February, respectively. The National Index looks set to rise 5.3 percent year-over-year in March, equal to February’s annual growth.

Zillow’s March Case-Shiller forecast is shown in the table below. These forecasts are based on today’s February Case-Shiller data release and the March 2016 Zillow Home Value Index (ZHVI). The March Case-Shiller Composite Home Price Indices will not be officially released until Tuesday, May 31. 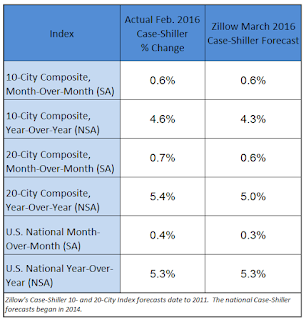 The Best Trade of the Year