The Census Bureau released the Residential Vacancies and Homeownership report for Q2 2016.

This report is frequently mentioned by analysts and the media to track household formation, the homeownership rate, and the homeowner and rental vacancy rates.  However, there are serious questions about the accuracy of this survey.

This survey might show the trend, but I wouldn’t rely on the absolute numbers.  The Census Bureau is investigating the differences between the HVS, ACS and decennial Census, and analysts probably shouldn’t use the HVS to estimate the excess vacant supply or household formation, or rely on the homeownership rate, except as a guide to the trend. 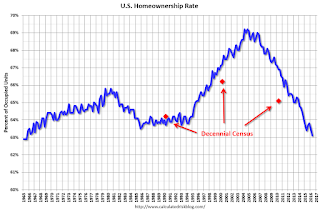 I’d put more weight on the decennial Census numbers – and given changing demographics, the homeownership rate is probably close to a bottom. 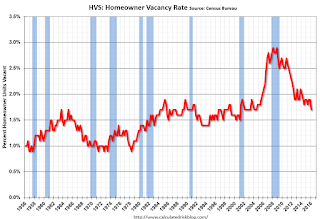 The HVS homeowner vacancy was unchanged at 1.7% in Q2.

Once again – this probably shows the general trend, but I wouldn’t rely on the absolute numbers. 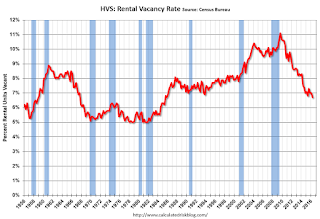 The rental vacancy rate declined to 6.7% in Q2.

The quarterly HVS is the most timely survey on households, but there are many questions about the accuracy of this survey.

Overall this suggests that vacancies have declined significantly, and my guess is the homeownership rate is probably close to the bottom.

If You Build It, They Will Come (Or Cancel)

A few comments on the Seasonal Pattern for House Prices

What You Missed On Wall Street On Wednesday