Claims taking procedures continue to be severely disrupted in Puerto Rico and the Virgin Islands as a result of power outages and infrastructure damage caused by Hurricanes Irma and Maria.
emphasis added 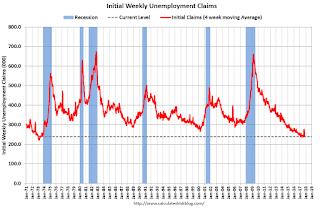 The dashed line on the graph is the current 4-week average. The four-week average of weekly unemployment claims decreased to 239,500.

This was close to the consensus forecast.

The Massive Bitcoin Boom, and the Uprising of Cryptocurrencies