It appears existing home inventory has bottomed in some areas, and might be close to bottoming nationally. For example, in May, inventory was up 8.3% year-over-year (YoY) in California.   However inventory nationally was still down 6.1% YoY in May.

But this isn’t like in late 2005, when inventory started increasing sharply indicating the end of the housing bubble. Currently lending standards have been reasonably solid (some loosening with FHA standards), and in some areas inventory is increasing – but from a very low level. As example, inventory was up almost 30% YoY in Sacramento in May, but the months-of-supply was just 1.5 months. Inventory in Sacramento could double or even triple, and house prices wouldn’t decline (months-of-supply in the 5 to 6 month range is somewhat normal).

If inventory starts to increase, then house price growth will probably slow.   But it would take a significant increase in inventory to see price declines.

The graph below shows the year-over-year (YoY) change for non-contingent inventory in Houston, Las Vegas, Phoenix and Sacramento (through May 2018), and total existing home inventory as reported by the NAR (also through May 2018). 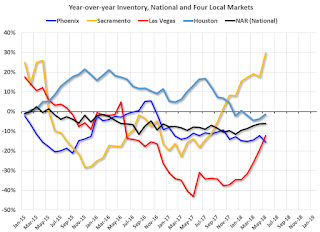 Note that inventory in Sacramento was up 30% year-over-year in May (inventory was still very low), and has increased YoY for eight consecutive months.

Also note that inventory is still down 12% YoY in Las Vegas (red), but the YoY decline has been getting smaller – and inventory in Vegas will probably be up YoY very soon.

Houston is a special case, and inventory was up for several years due to lower oil prices, but declined YoY recently as oil prices increased.

Inventory is a key for the housing market, and I will be watching inventory for the impact of the new tax law and higher mortgage rates on housing.   Currently I expect national inventory to be up YoY by the end of 2018 (but still be low).

This is not comparable to late 2005 when inventory increased sharply signaling the end of the housing bubble, but it does appear that inventory is bottoming nationally (and has already bottomed in some areas like California).

On The Fly: Top stock stories for Thursday