The Census Bureau reports New Home Sales in September were at a seasonally adjusted annual rate (SAAR) of 959 thousand.

The previous three months were revised down, combined.

Sales of new single-family houses in September 2020 were at a seasonally adjusted annual rate of 959,000, according to estimates released jointly today by the U.S. Census Bureau and the Department of Housing and Urban Development. This is 3.5 percent below the revised August rate of 994,000, but is 32.1 percent above the September 2019 estimate of 726,000.
emphasis added 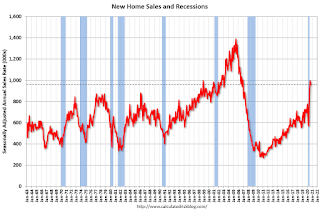 This is the second highest sales rate since 2006 (just below last month). 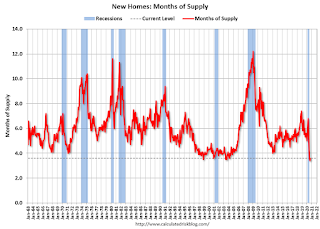 The months of supply increased in September to 3.6 months from 3.4 months in August.

This is below the normal range (about 4 to 6 months supply is normal).

“The seasonally-adjusted estimate of new houses for sale at the end of September was 284,000. This represents a supply of 3.6 months at the current sales rate.” 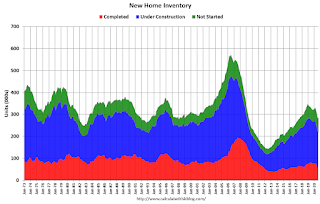 On inventory, according to the Census Bureau:

“A house is considered for sale when a permit to build has been issued in permit-issuing places or work has begun on the footings or foundation in nonpermit areas and a sales contract has not been signed nor a deposit accepted.”

Starting in 1973 the Census Bureau broke this down into three categories: Not Started, Under Construction, and Completed.

The third graph shows the three categories of inventory starting in 1973.

The inventory of completed homes for sale is low, and the combined total of completed and under construction is lower than normal. 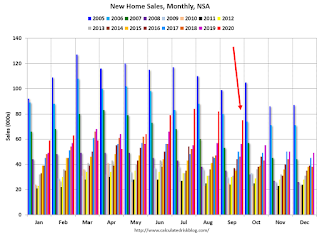 This was below expectations of 1,025 thousand sales SAAR, and sales in the three previous months were revised down, combined. I’ll have more later today.

Gold, Silver, Markets & More: Crashing, Surging, Whipsaw Volatility Or Undercooked Nothingburger In Final Week Before The Most (Or Least) Important Election, Ever…?!?

Dow Roars Back from Major Selloff