Note: The year-over-year occupancy comparisons are easy, since occupancy declined sharply at the onset of the pandemic. However, occupancy is still down significantly from normal levels.

From CoStar: STR: US Hotel Occupancy Dips From Previous Week

Following the end of spring break, weekly demand fell back below the 22 million mark, and occupancy dipped to its lowest level since mid-March. The ADR level was also US$5 less after two straight weeks above US$112.
emphasis added 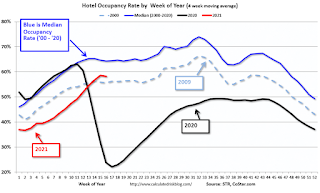 Occupancy is now above the horrible 2009 levels.