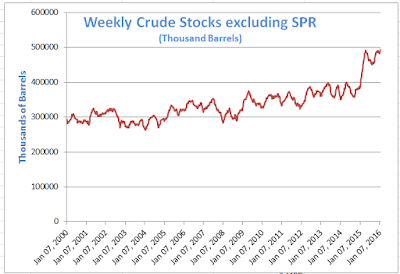 Here are some interesting comments from the Weekly EIA Report.

Crude Jumps on News Russia May Cooperate with OPEC

Oil futures surged on Wednesday, after Russia said it was discussing the possibility of co-operation with OPEC, fanning hopes that a deal was in the works to reduce oversupply that sent prices the lowest levels in a dozen years last week.

Russia’s energy ministry said possible coordination with the Organization of the Petroleum Exporting Countries (OPEC) was discussed at a meeting with Russian oil companies on Wednesday.

“I remain skeptical, at the end of the day, about that happening as the oil producers are looking at the other guy to cut production while maintaining their own levels,” Andrew Lipow of Lipow Oil Associates said.

Crude was looking firm before the Russia news on the back of a U.S. Energy Department report showing a surprise spike in demand for refined products like heating oil last week, when a massive blizzard hit the U.S. Northeast.

The U.S. Energy Information Administration said inventories of distillates, fell more than 4 million barrels, trumping expectations for a rise of about 2 million.

Despite the small drawdown in fuel oil please recall the report stated “Distillate fuel inventories are near the upper limit of the average range for this time of year.”

Economists can be surprised by anything including the possibility blizzards and cold weather may increase the demand for fuel oil in the Northeast!