Here is an update on hotel occupancy from HotelNewsNow.com: STR: US results for week ending 23 January

The U.S. hotel industry reported mixed results in the three key performance measurements during the week of 17-23 January 2016, according to data from STR, Inc.

The following graph shows the seasonal pattern for the hotel occupancy rate using the four week average.  Hotels are currently in the weakest part of the year; December and January. 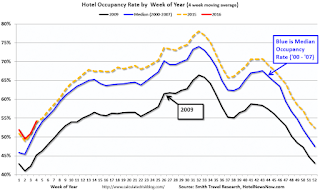 2015 was the best year on record for hotels.