On January 18, I sent the article below (starting with the title Nate Silver Off the Mark on Donald Trump Nomination Odds)  to the New York Times as an Op-Ed.

They did not publish it. It’s hard enough  getting something timely to major new organizations, and when you do, you have to sit and wait day for in this case no response. The New York times has the best turnaround of the bunch, three days so I could have used this earlier. This would have been more timely on the 18th and even more timely when I first started writing, but here it is now. What I had to say the is still relevant.

Nate Silver Off the Mark on Donald Trump Nomination Odds

I am a big fan of Nate Silver. His calling of the last two elections was nothing short of brilliant. However, I just cannot accept Silver’s current assessment of Trump’s chances of winning the Republican nomination.

In footnotes to his January 8 article Three Theories Of Donald Trump’s Rise Silver expressed belief that “Trump’s chances are about half of what betting markets say they are. I think they’re about half that – 12 or 13 percent.”

Trump Odds According to Nate Silver 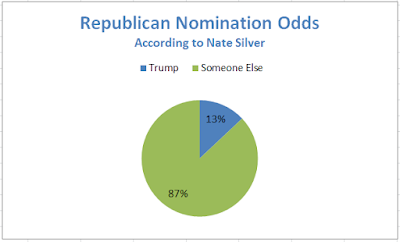 Given Trump’s commanding lead in the polls, one might instinctively think Silver is crazy. But Silver cites historical precedents:

To that Silver adds “Trump could lose New Hampshire either to a surging Cruz or if one of the several establishment candidates — Marco Rubio, Chris Christie, Jeb Bush, John Kasich — can consolidate the support of more moderate/establishment Republican voters.“

In defense of Silver, I would personally add there are 12 Republican candidates and anything could happen, in theory. One chance in 12 would be just over an 8 percent chance.

Chances are not all equal. So let’s place some odds on some additional candidates.

As long as we are taking history into consideration, Ben Carson has flamed out. Has a flame-out ever recovered? Does Rand Paul (my preference) have more than a 0.1% chance?

Does anyone in the above group of eight have more than a 0.5% chance? If so, who and why?

Even if you gave them all a 1% chance, which seems generous, the total combined odds would be 8%. Nonetheless, let’s make that assumption and place it in a new chart. 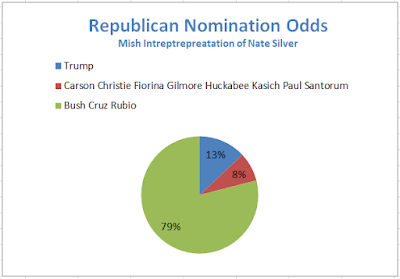 Does the combination of Bush, Rubio, and Cruz really have a 79% of winning the nomination?

Triple the odds of the “group of eight” winning the nomination to a preposterous 24% and the “group of three” would still have a 63% chance of winning.

By focusing solely on the odds of Trump winning, while placing no odds on the others, Silver introduces a mathematical bias far beyond what history can reasonably suggest.

Silver discounts national polls. I sympathize. But how far does one want to take that idea given that primaries start less than two weeks away?

Do candidates polling less than 5% at this stage often win nominations?

If one generously gives a Bush 5-15% chance of winning the momination, the combined Cruz Rubio odds would be something in the 65-75% range, assuming the group of eight has an 8% chance and Trump a 13% chance.

Arguably, the best chance for Bush and the ABT (Anybody But Trump) crowd has is if the Republican convention is deadlocked.

Until we see the results from Super-Tuesday and the polls of the states that follow, a deadlocked convention is a distinct possibility, but not one I have seen Silver depend on.

Other Flaws in Silver’s Odds Estimates

We are dealing with humans, in real time, not history.

History suggests fringe candidates don’t usually win elections, but they can. Jimmy Carter was  unknown, but he won. Obama was not supposed to beat Hillary, but he did.

Yet, flame-outs are more likely. Carson did just that. So have many others.

Rather than insisting a historical flame-out is still likely, Silver just might wish to consider reasons Trump will not flame out.

For example, a Gallup Poll headline from January 18 plays straight into Donald Trump’s hands: Majority in U.S. Now Dissatisfied With Security From Terrorism. 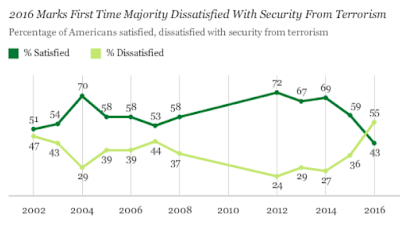 Does Unpopularity Matter? When?

Does unpopularity mean “People won’t vote for the guy?”

I don’t particularly like Trump. But I would vote for him over Clinton or Sanders.

What did Carson have before he flamed out other than he was “likable”? Amusingly, he’s still the most likable Republican.

Carson comes across as sincere, and he is likable. But I would not vote for Carson under any circumstances. I would instead “waste my vote” and write in Rand Paul or vote for the Libertarian candidate.

Trump draws amazing crowds. Silver dismisses that. Yet, the last time someone generated this much crowd energy was Ronald Regan.

This is not a basketball game. Nor is this a one-on-one play with polls all breaking one way at the last minute. Those are areas in which Silver excels.

This is a one-on-many play, where voter attitudes have consistently sided with Trump, no matter who he offends. It’s a mistake to discount such sentiment.

Like him or not, Trump is clever. For Republicans, he is on the right side of security, guns, abortion, and China. That’s quite a bit.

And he’s also a genuine outsider at a time nearly every other Republican is pretending to be one.

Is there any reason to suspect voter attitudes on terrorism, on Trump, or on Washington insiders will change in the next few weeks?

Odds of Winning it All

I suggest Trump’s odds of winning the nomination are far more than what odds makers presume.  And if Trump wins the nomination, I suspect his odds of him winning it all would be about 50%.

My rationale is that Hillary may not win the nomination. There is some chance of a criminal indictment related to emails. Sanders could pull out an upset. Odds of one of those have to be higher than the alleged 13% chance Silver assigns to Trump.

AWM (Angry White Men) will be a factor, perhaps totally negating any personal dislike of Trump.

Most importantly, I think the US approaching, if not already in a recession. Eight years ago, Obama blew dissatisfied Republican out of the water on the heels of a big recession that had just started.

Why can’t that happen again? If anything, history suggests it will.